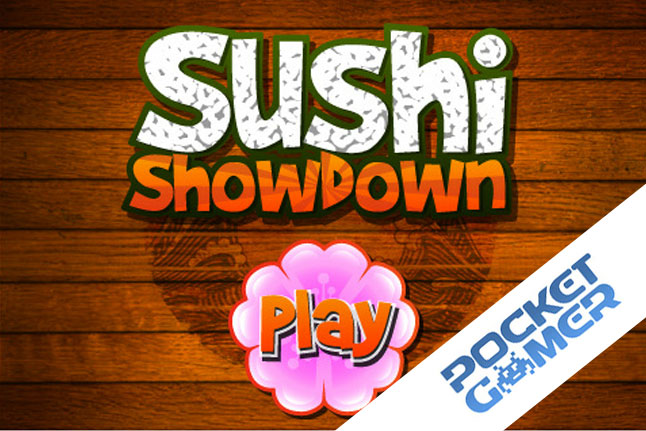 PocketGamer spoke to us and we told them about how Sushi Showdown came about. Here’s a short excerpt:

The game has some undeniably solid gameplay mechanics behind it, but how exactly did the actual idea behind the marauding sushi come about?

“There are a couple of hardcore cooking enthusiasts in the team,” explains Ng, “and the breakthrough came about when we realised that the enemies could be, well, anything. Even food. Then someone mentioned Sushi and the Yakuza. We thought getting non-threatening sushi to behave like gang members would be hilarious.”

“In essence, almost every tower defence game there is out there was an inspiration,” Ng says, “Cooking Mama as well. All of us at Mezmedia loved that game.”

One of the game’s most notable strengths is its presentation. From the wonderfully bizarre opening cut-scene (see the trailer below) to the crisp and colourful artstyle the game oozes personality.

Ng claims that a lot of care ended up going into the design of the sushi itself, and is the part of the game that his team are most proud of.

“We really loved the characters, especially the Bosses,” says Ng. “The research that went into it was actually quite in-depth. We wanted them to be as authentic as possible.

“Take the Boss Udon for example – the pattern on the bowl was inspired by Yakuza tattoos. But instead of fearsome dragon, it’s a Bonita fish, the mainstay of Japanese cuisine.”

For more, do read the entire article on PocketGamer – Mezmedia on how Sushi Showdown on iOS is a true gaming delicacy. Download the free version of the game here.